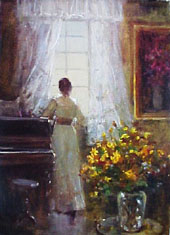 is not a well known fact that impressionism began in Brazil.

In the 1850’s, the painter Manet was aboard ship in the harbor of Rio de Janeiro, overwhelmed by the intensity of light and the reflection of the houses and the mountains and forests on the placid waters of the bay.

The tropical light had a marked effect on him and the memory of the scene remained in the retina of his inner eye. Suffering from what is believed to be malaria and forbidden to embark, he remained on ship for nearly a week. The view of Rio left a keen impression on his mind, and decades later he told his friends and art critics that the view of the Bay of Guanabara was his first intuition of art in a new form that was later to be called impressionism. 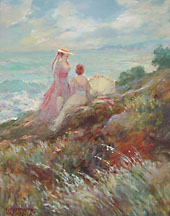 In this sense the Brazilian painter Maguetas is bathed constantly in this tropical light, yet oddly enough modified by a northern outlook, as though the impressionism born in Brazil was refined in Europe and rerefined here in the inner eye of Maguetas more than a century later.

His paintings lead the observer to a distant past, imaginary experiences that were never really lived by the artist. The figures are almost always feminine and surge from an atmosphere of fantasy and dreams.

It is odd that Maguetas chose the impressionist mode to express his dream to the world. He was born in Taquaritinga in 1942 and began to sculpt in clay at the age of 13, with his first art show at the age of 15 in his home town. The next year he moved to Catanduva and studied with local artists there and at the age of 18, began to teach painting. In 1963 he received prizes from the Salão Paulista de Belas Artes, at the age of 21. 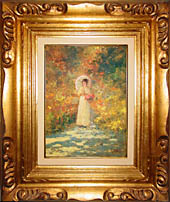 Since then he has been showing at the major galleries in São Paulo and the rest of Brazil, and his work has been part of museums, galleries and private collections in Bonn, Cologne, Hamburg, Buenos Aires, Bariloche, Vienna, Brussels, La Paz, Quebec, Montreal, Santiago, Abidjan, Cairo and many other places.

The newspaper O Estado de S. Paulo remarked: “He is an artist who begins with the abstract and moves to impressionism and has won honors in the art world.”

Many persons purchase the paintings of Maguetas as an investment, as they have increased considerably in value and have not yet attained international prices charged by artists of the same quality and reputation. Others purchase his paintings for their aesthetic effect and his brilliant technical control. In both cases the buyers cannot go wrong. 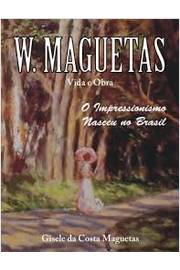